‘Beetlejuice’ Documentary In The Works

Tim Burton’s cult classicÂ Beetlejuice wants to come back to life through a tell-all documentary. According to the Kickstarter campaign, the film will include: Interviews with cast and crew, behind the scenes photos and videos, are production archives such as concept arts, blueprints, tour of filming location East Corinth, Vermont Interviews with people of East Corinth who were there for the filming, meet fans that create great stuff about the movie, meet props collectors, meet Tom Spina, who worked on restoring the props, 30 years later and meet poster designer Kyle Lambert. The documentary will also have never-before-seen archive footage including stop-motion sequences digitized in 2k! 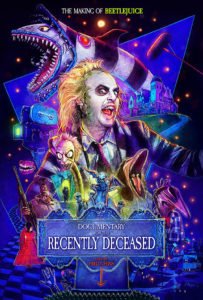 The kickstarter was launched to complete the film and get it going for the public. There are some pretty cool donation rewards as well, like the Blu-ray and DVD’s, t-shirts, and even unique rewards fromÂ The GoldbergsÂ creator Adam F. Goldberg, who is the executive producer of the doc. Let’s hope this become a reality!