Nine skydivers and two pilots were involved in a massive mid-air crash back in 2013. All 11 people involved survived the crash, and the Go-Pro footage captured everything. From the moment the passengers were planning to jump up until they were led safely away in a truck on the ground.

Employees at Skydive Superior in Wisconsin were conducting their final jump of the day called the "sunset load." The two planes were flying in formation, as usual, and the events leading up to the crash were going smoothly. 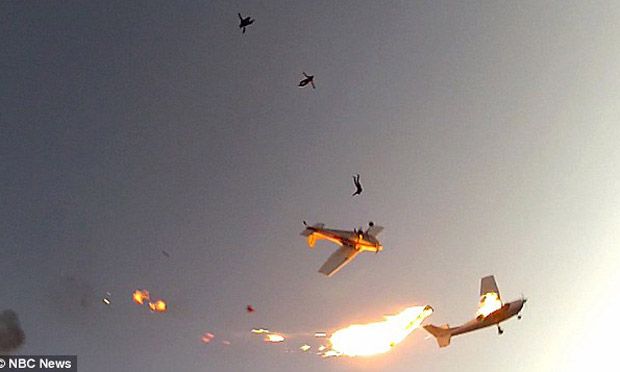 "We do this all the time," instructor Mike Robinson said. "We just don't know what happened for sure that caused this."

Video from the plane at a higher elevation capture Robinson and three other skydivers getting ready to make their jump. People were outside of the plane at the time when the plane from below quickly comes into frame and crashes into the plane. The upper plane bursts into flames and breaks apart. An obvious fight or flight response kicks in, and the divers jump off. The pilot can be heard shouting, "Go!" as the last person leaves. The pilot, who also had an emergency parachute equipped, was the last person to escape the firey plane.

On the second plane, three skydivers who were also preparing to jump got knocked off immediately. Two others were still inside the plane and managed to jump as well. The pilot of this plane was able to make an emergency landing and survived.

The video footage is incredible and has many different angles. Almost all of the divers had been wearing Go-Pro cameras on their helmets, so they were able to capture everything. It's not luck that they all survived; it's the fact that everyone did exactly what they were supposed to do in a situation like that.