Â ShiningÂ is one of the most talked about horror films in history. The story, the miseÂ en scÃ©ne, the easter eggs… People can’t get enough of it. But what really get’s people going is how well Jack Nicholson played his character, Jack Torrance. 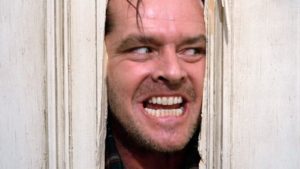 The failed writer-turned-ax-murderer pretty much had a horrific look in his eyes the entire time. This video has been out for a long time, but it never fails to impress anyone who watches it. The way Nicholson is hyping himself up is kind of scary. From the looks of it, this is how Jack Nicholson stayed in character throughout the film. Honestly, there wasn’t much of a difference between this man and Jack Torrance! Especially when he started whipping that ax around.