Tom Slemen is an author who researches "paranormal Liverpool" and writes about the experiences that are told to him. In addition to these stories, he undergoes research to try and get to the bottom of the stories that he's told and to find the historical backing. In this instance, he tells the story of John Henry Kingsley, a "living ghost" in Liverpool.

In the 1880s, a wealthy man, rumored to be named John Henry Kingsley, lived in solitary along a popular street. Kingsley had disappeared from society decades prior, after an argument with a man whose wife Kingsley was having an affair with threw acid on his face. Kingsley was left disfigured and became a recluse. 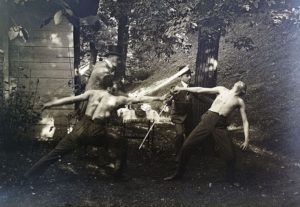 The ghostly man could be seen peeking out of his curtained windows on the second level of his home. Some children said he had opera glasses that he used to see. In 1885, Kingsley became infatuated with the neighbor's tutor, Imogen Roberts. Kingsley sent love letters to her, which infuriated her fiance, Alistair Balfour.

At one point, Balfour caught Roberts writing a love note back to Kingsley, which sent him into a blind rage. Under the guise of a friend, Balfour took two swords to Kingsley's home in an attempt to duel for Roberts' love. The duel began the second Kinglsey opened the door to the angered and drunken man. The two fought it out until a neighbor filed a pistol to get them to stop. 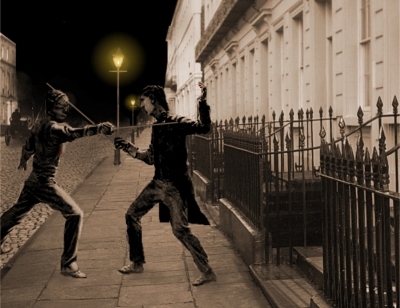 Kingsley's lung had been punctured and Balfour lost two fingers. Kingsley died from his injuries alone in his house. Balfour survived his injures, but ended up dying after falling from a horse a day before he and Roberts' wedding.

Imogen Roberts died a spinster decades later. The ghost stories say that the two men can sometimes be seen dueling it out on the streets of Liverpool.