The village of Rippletown was erected in the 1980s. It became a popular hub when a sawmill brought in jobs and opportunities. Eventually, the village grew big enough to become a hub of sorts and needed a schoolhouse.

The Rippletown School was built on the corner of Church Road and Lines Lane. It didn't take long for the rise and fall of the town to abandon the schoolhouse. The reason for the closure was due to the lack of teachers. Locals believe that ghostly phenomena pushed them out.

One teacher said that they felt a bizarre presence the second they stepped into the schoolhouse for the first time. Many others claimed to have felt the same presence, and that it felt wrong. The Wilkes-Barre Times published an article on July 26, 1885 showcasing the experience of a student:

“The ghosts, hobgoblins, visitants from the other world, or whatever they may be, manifest their presence in but one way– a rumbling and cracking of the ceiling as if someone were above it rolling a game of ten pins.

“The games begin at around 5 o’clock each afternoon, apparently with but one or two players, but as the shades of evening fall and night advances the hilarity increases, and during the midnight hours but one result of the pandemonium seems possible– that the very roof may fall.” 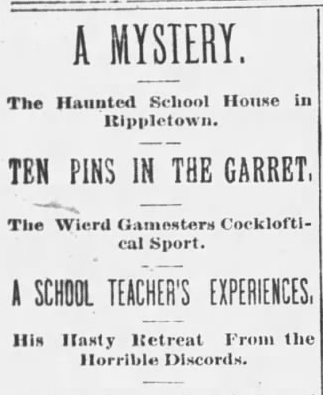 It's super unclear as to why this place would be haunted. It's possible that there were some unmarked graves that were disrupted during the founding of the town. After all, the surrounding area was settled in 1833, so it's not like nobody lived in the area until the Rippletown settlement.

Either way. The schoolhouse still stands and offers a spooky tourist spot for locals.