The "Little Albert" experiment was conducted in 1920 by behavioral psychologist Dr. John B. Watson and his graduate student assistant Rosalie Rayner. They piggybacked off of the famous experiments conducted by Ivan Pavlov, specifically his research into the cognitive study of conditioning.

Pavlov conducted his research on dogs, but Watson wanted to take his experiments a step further by conducting conditioning exercises on a human being.

Enter, Little Albert. When this little dude was just 9 months old, his mother (a wet nurse at the hospital that the scientists were conduscting their research in) gave him up for experimentation for just $1. 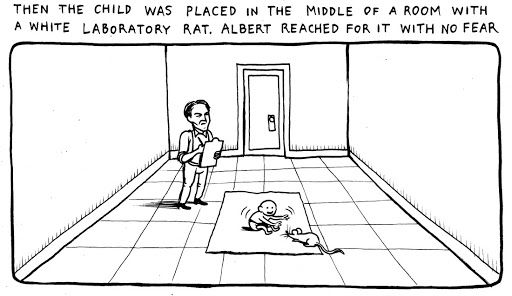 The experimentation started calmly, with the scientists simply introducing the infant to various forms of stimulus and observing his reactions. They tried introducing some strange things to the boy, like showing him a monkey, creepy masks, burning newspapers, and heavy pieces of metal, all of which garnered no reaction.

However, the scientists introduced a white rat to the infant and coupled that with banging loudly on a metal pipe, which caused the child to cry. The scientists continued this experiment until the rat would make Little Albert cry on sight, without even having to bang on the metal pipe.

Once Little Albert's mother caught word of this, she withdrew him from the program immediately and moved to a different hospital.

It's rumored that Little Albert died at the age of 6 from a fluid buildup in his brain, but more recent research states that the boy who claimed to be Little Albert was lying, so we really have no clue what happened to this child after he experienced one of the most historically unethical human experiments of all time.