Naturally, there's going to be a pretty gruesome story behind so-called Bloody Bridge. Locals grew up with the tale of the bloody bridge and how it came to be, but what's the true story?

In 1854, two friends began working as mule drivers for canal boats. Jack Billings worked on "Daisy" and Bill Jones worked on "Minnie Warren." According to the story, the two men had been pretty close and got their jobs along the canal on purpose so they could see each other more.

The "Minnie Warren" was named after the captain's daughter, Minnie. The two men had joked about who is going to take Minnie's hand in marriage even before they met her. Unfortunately, things changed between the men the second they met the captains daughter.

Both men fell head over heels for Minnie. The two began their fight to win over Minnie's heart. Needless to say, their civil friendship quickly ended. 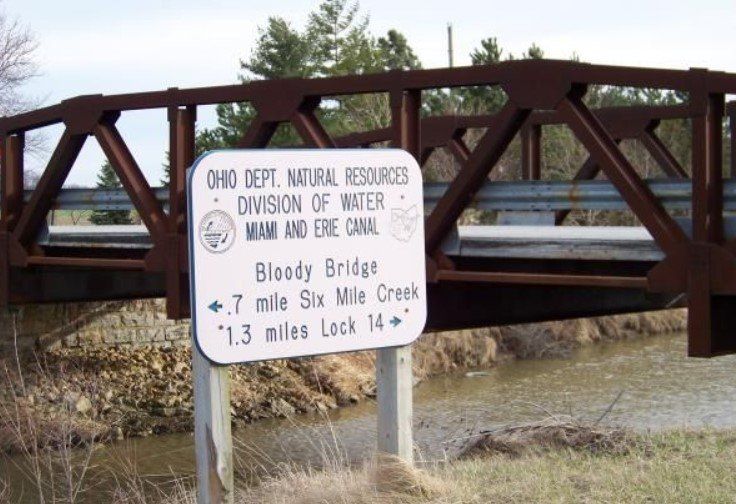 Eventually, Minnie ended up falling for Jack. Working around the two lovebirds became a daunting task for Bill, who was still in his feelings over Minnie. Jack and Minnie didn't try hiding their relationship, either, and were very affectionate in front of Bill.

Later that June, Minnie and Jack went on a date using her father's canal boat. Bill overheard their plans for a late-night date and decided to let them know how he was really feeling

It was late at night when Minnie and Jack were returning from their date when Bill jumped out from behind a pillar of the bridge with an ax. The couple must have been taken by surprise because there were no signs of struggle at the crime scene.

Bill quickly swung his ax and decapitated Jack. Legend says that Minnie fell into the water in shock and drowned, although it's not clear if she was pushed or forcibly drowned. 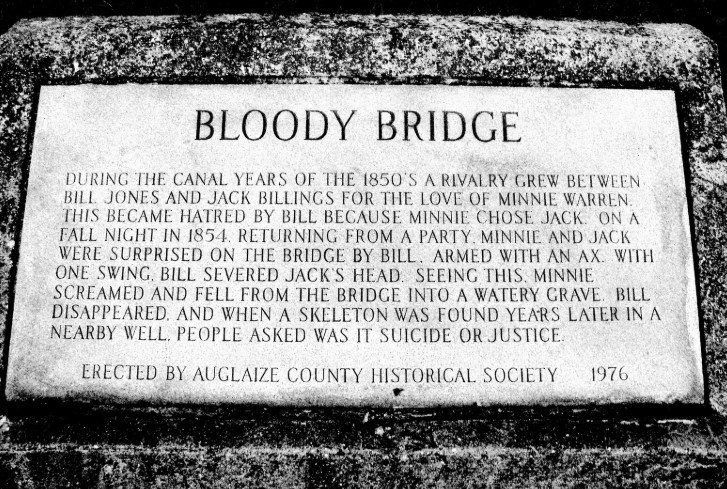 Minnie's body was found soon after her death. Police also noted blood splatter on the bridge from when Bill attacked Jack... For some reason, no one felt that it was their responsibility to clean up the blood.

John's blood splatter remained on the bridge until the late 1890s, hence the name of the bridge. Due to the brutality of the crimes, it only makes sense that the couples' ghosts remain at the scene. there were ghost sightings as well. Some have said they'd seen a headless body wandering around the canal. Others have said they see a woman staring back at them from the water.

Bill Jones went missing soon after the murders. Four years later, his skeleton was found at the bottom of a nearby well.

The actual bridge itself has been updated since the murders, but the history still remains. The Auglaize County Historical Society erected a plaque commemorating the legend.