Redditor Figures Out the Identity of His Friends Serial Killer Grandfather

The internet can help connect the dots with anything. You never know who holds the knowledge that you need! One Redditor took to r/TrueCrime to try and figure out an age-old mystery from his childhood...

Redditor katyrs1 reached out to the members of the thread in search of possible information on a childhood friend's grandfather. He was only 14 when he found out what went on behind the scenes in his friend's family, and now, in his adult years, he wants some answers. 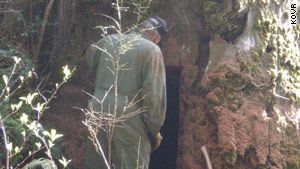 According to the Redditor, he made friends with a boy in his school. His mother thought that she heard something about his friend's dad being creepy and wouldn't let him go over their house. One day, the friend asked the friend group if they wanted to go over later that night. His one friend, Mike, agreed while he denied it. Later, Mike asked why he didn't want to go over their friend's house.

"Why? Is it because his father helped with one of the bodies?”

Obviously, that was not the question u/katyrs1 was expecting. This lead to a lifelong search of who his friend's grandfather was and what happened. Finally, years later, his questions were answered.

As it turns out, his friend's father was a victim. Ernest Samuel Christie Jr. murdered a woman and forced his son, Ernest Samuel Christie III, to help bury her. According to CNN, "The alleged killer's son told authorities that he watched his father kill 27-year-old Lysandra Marie Turpin in 1988 and that his dad forced him to help dispose of the body."

The murder happened in California but Christie III moved to North Carolina, where the original poster and his friends grew up, afterward. The murderer died in 2006 but had other suspected murders under his belt that he got away with. Christie III also lead police to another apparent murder sight where they found evidence. He even lead authorities to another woman who he tried to kill, but he escaped. She corroborated the story.