Coronavirus has heavily impacted several small businesses that were forced to shut down in order to stop the spread. Among those closing was The Nugget Spot in New York City. Many have lost their jobs and livelihoods due to these closings, and owner/chef Jason Hairston wanted to help someone since he could not help his staff. "We've had a crippling drop in sales," he said. "I tried to keep a few of my staff but, for the most part, I told them they should start filing for unemployment." 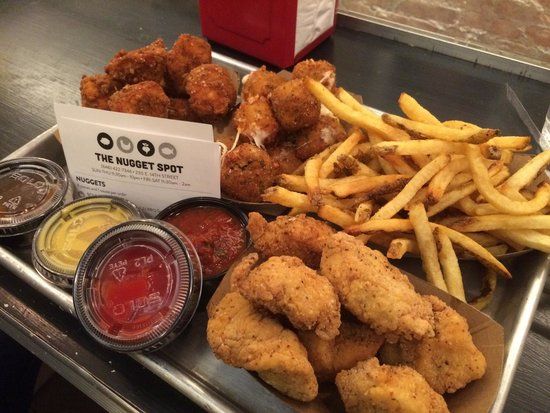 Since the outbreak and shut down came out of nowhere, many restaurants still had stockpiles of uncooked food in the back, so Jason and his team decided to donate the 800 pounds of unsold chicken nuggets to those who need it most. "I don't like to waste food, I think that's a shame," said Jason. "If we're going to close, we might as well get it to those in need." The team didn't just give them any old chicken either.

Sending love, hugs and NUGS. Thank you @CityHarvestNYC and @BRC_org for helping to get these thousands of nuggets to those in need ❤️

The staff went all in creating some of the store's signature dishes like "Cap'n Crunk Nugs" which were nuggets coated in a layer of Cap'n Crunch cereal, Skinny Nugs which baked in a Cajun seasoning, and "Regs" which was a classic homestyle take on fried chicken. They also included homemade sauces like ranch, queso, and BBQ sauce."We gave them everything perishable. Some butterscotch pudding, some salad, eggs," said Jason. "Basically anything that could go bad that they can use before it does, they got it."

Sorry NUG lovers, but today will be our last day open as we ride out this COVID-19 situation. We tried to make it happen, but between the costs to keep the shop open and delivery services like @Seamless, @Grubhub, @UberEats & others not helping out by lowering or waiving fees - we simply cannot 😢 . We truly appreciate all of your support, and can't wait to be servin' you NUGS again real soon. At the end of today, anything remaining at the restaurant will be going to our friends over @CityHarvestNYC. Stay healthy and safe everyone, check back for updates soon ❤️ #EatmoreNUGS

"If there's going to be some kind of silver lining to this, it's that people in need are getting food[...] At least the food isn't going to waste." Hairston also allowed his employees to take some food for themselves, now that they were out of work.  He recommends buying gift cards and avoiding takeout apps (as he calls them, "the middle man") to support your local hot spots.