A Twitter user posted footage that they had found online of Tesla's collision avoidance system seemingly bugging out. The system is meant to detect people, objects, and other cars to avoid slamming into them. With this feature, the driver can see (digitally) what they are driving by. The driver of the Tesla had been parked in a cemetery when the figure appeared.

The 14-second clip is short, but it gets to the point. The driver begins filming on the giant iPad-like screen that's nestled in the front of the Tesla dashboard.

After showing the viewer what they are seeing, they pan the camera up to their view outside of the car. There is no one there, only graves. They pan down and pan up again just to show that the car is detecting something that they cannot see.

It's a bit eerie, especially since this isn't a known bug to Tesla users and the driver was taking a drive through a cemetery. Most paranormal community members would argue that no spirit would haunt where their body was, but who is to say that a spirit isn't a fan of a graveyard? 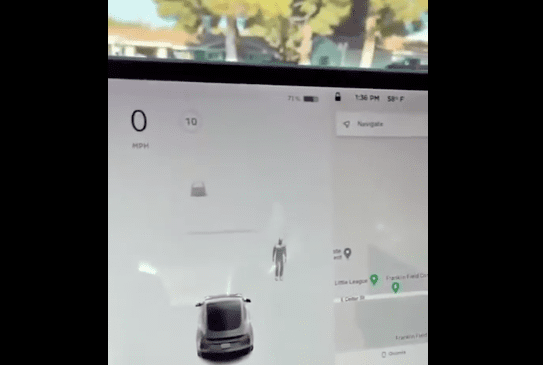 Naturally, the ever-busy Elon Musk did not respond to the Twitter user's question, but other people decided to pitch ideas as to what it was picking up. Maybe someone was buried alive. Maybe it was just a glitch. Or maybe, just maybe, it was detecting an actual spirit!