In July of 1925, Buddy Schumacher, Jr. was murdered from his small suburban town of Wauwatosa, just outside of Milwaukee, Wisconsin. Nearly 100 years later, the details of his murder are still unknown.

On the morning of July 24, Buddy went to a local watering hole with some friends. To get there, they had to hop on a freight train. Three of his companions said that they saw him jump from the train with them, but that was the last they'd seen of him. He didn't return home that day.

His family immediately started a search party. They looked for any sign of Buddy for weeks but found nothing. Then, on the seventh week of searching, his body randomly appeared just a mile from his home. His body was obviously mutilated and sexually abused. A handkerchief was lodged deep in the back of his throat. His cause of death was ruled as suffocation.

The media hopped on this story immediately. There were hopes that widespread coverage would eventually lead to someone who might know something about the slaying, but that information was never presented. There were leads that only lead to a dead-end in the investigation. 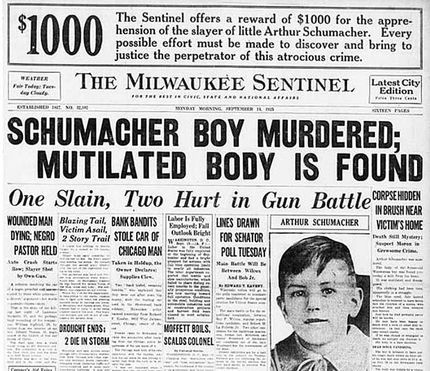 There were even two men who claimed to have committed the crime but their accounts didn't match up. The men were also listed as mentally challenged on their medical records. Sadly, no other viable suspects were ever brought forth.

Some people, including a man who had moved into the Schumacher home as a child, took interest in the case and researched it on their own. Sadly, since over 90 years have passed, there's no way to truly bring any justice to the young boy and his poor family who never got closure.