The Children Who Plotted Another Childs Murder

A bizarre murder plot hatched by two little girls barely made headlines in 1885, but that doesn't mean that the crime wasn't gruesome.

Mary Cooper was nine-years-old when she and her five-year-old sister, who is unnamed, killed their seven-year-old cousin, Melville Barrett. The two girls were living with their uncle at the time, who obviously took the punishment for the crime at first.

According to Mary, she was upset that her cousin ate her egg. That's when she and her sister plotted a way to get back at him. They didn't want childish revenge... They wanted to kill him.

Mary told Melville that they wanted to hang a swing. She got him to stand on a chair to attach a rope to a beam in the cabin ceiling. Somehow, Mary looped the end of the rope and convinced Melville to put his head through it. Once he did, Mary kicked the chair.

The two little girls beat him with a shovel at that point. When the police came, uncle David Cooper was brought to jail under the suspicion of the boy's murder. After a couple of days, Mary told the police that she and her little sister did it.

The two girls calmly told police what they did. They ended up appearing in front of a grand jury and told the same story.  Unfortunately, the case never made it to the headlines. There was one story published, but that was it. 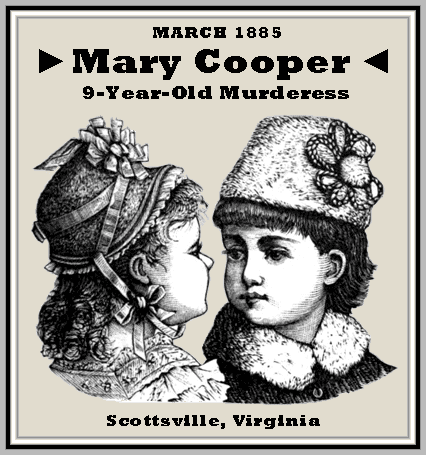 It's unclear what happened to the little girls. Did they spent the rest of their lives in jail? Did they get acquitted due to their young age? It's unclear, and we probably will never know unless someone digs deep into the Richmond, Virginia state prison files.