The Disappearance of Elisabeth Huster

10-year-old Elisabeth Anne disappeared in 1996 when she missed the first day of school. Her mother, Karen, claimed that Elisabeth was visiting family far away.

Elisabeth parents had been estranged and headed towards divorce at the time of her disappearance. Her father, Michael, already had custody of her older brother. He had been trying to get custody of Elisabeth when she disappeared. On Thanksgiving, Karen's eldest son visited and noticed that Elisabeth was missing from dinner. Karen said that she was spending the holiday with friends.

Michael reported Elisabeth missing on December 23, 1996. The police questioned Karen about Elisabeth's whereabouts but she refused to cooperate. Karen Huster fled shortly after her interviews but was arrested in February of 1997 under suspicion of custodial interference.

Four years later, the police found frozen body parts in Karen's fridge after a wellness check was performed on a man she lived with. Karen, who had been on the run since her daughter's disappearance, claimed that the remains were of her roommate who died from a heart attack. Somehow, the police believed her despite countless character testimonies that she was hostile. Still, this situation was useful in finding Karen and convicting her of her involvement with Elisabeth's disappearance. 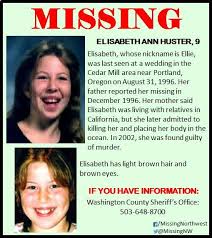 Karen told authorities that her daughter was in California, but never gave an exact location. She spent two years in prison for custodial interference and eventually confessed to killing her daughter out of" fear that she'd be mentally ill," and dumping her body in the Pacific Ocean. Karen was convicted of being involved with Elisabeth's disappearance in 2000 and sentenced to 25 years to life. Elisabeth's remains have never been recovered.