By Brianna M 2 years ago

Glass coffins were a popular practice in the late 1800s, especially by German royalty and leaders. Vladimir Lenin, a Russian revolutionary politician, lies in a glass coffin in Red Square. North Korea’s Kim Il Sung also resides in a glass coffin. Basically, this coffin is mainly for viewing a person after they are dead. They’re absolutelyÂ not for burial, mainly because the glass would not be able to handle the weight of the dirt. But also, why pay for such a fancy coffin when no one will be able to use it? 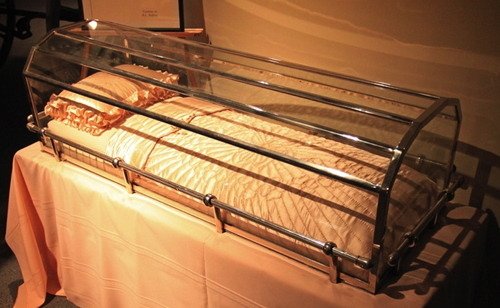 These cases are sealed permanently. They can not be opened in order to deter crazed mourners from attempting to touch the corpse orÂ cut off the hair. Yes, that’s happened! Other leaders forever immortalized in their glass coffins include Venezuelan President Jugo Chaves, China’s Mao Zedong, and Vietnam’s Ho Chi Minh.