The Untold Story of the Murderous Mayflower Pilgrim

There were a lot of ‘firsts’ to happen when Pilgrims landed in the New World, but the one story that’s almost never told is that of the first convicted killer. John Billington was known to be a troublemaker, even on the voyage on the Mayflower. He was in debt in England and made a deal with a London businessman to get out of it. He must work on behalf of the colony for seven years to pay off his debts. He agreed, but things quickly changed when he realized just how different he was to the other voyagers. He was devoted to the Church of England, unlike his fellow passengers. This caused a lot of quarrels. Billington was called a “foul-mouthed miscreant” in multiple writings. His son almost burned the entire ship down when he used his father’s handgun near a barrel of gun powder. They quickly made enemies.

Billington signed the Mayflower Compact and even had a seat at the first Thanksgiving dinner table. That didn’t mean much… His sons were constantly getting into trouble with Native Americans, and his wife was convicted for slander. When they divided up the lands, Billington got the smallest plot. He was a true outsider. One day, he got into a fight with a neighbor. It’s not clear as to what, but it was heated. 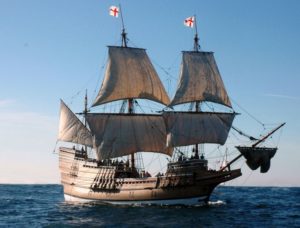 Days later, Billington walked up to the neighbor in an open field and shot him point blank, killing him. After a trial by jury, Billington was sentenced to death by hanging. He was the first recorded murderer persecuted by the United States.