The Halloween Nightmare of Samantha Payne

The last time Samantha Payne's mother saw her daughter alive was on Oct. 30, 2015, for her 29th birthday. Payne told her parents that she would be going to a Halloween party the next day. Payne never returned home, and her mother reported her missing on Nov. 9, the same day that her battered body was found tied to a tree in Talladega National Forest.

After her body had been found, a police officer contacted investigators on the case and revealed to them that he had arrested a bloodied couple in that same forest. Their bloody appearance concerned the officer, so he stopped to speak with them. He found meth on both of them when he searched them.  The timing and situation were too perfect, so the investigators spoke with the couple, Steven George and Chylli Bruce.

When asked about Payne, the two immediately said that a man named Belcher committed the murder. They admitted that they were involved with the death but it was all Belcher's plan. Chylli, Steven, and Belcher were charged with capital murder.

According to the story, the group had been doing meth together when Belcher decided to steal Payne's catalytic converter from her car. When she went to the bathroom, they stole her car, stole the piece, and then lit the car on fire. When Payne found out what they had done, she threatened to call the police. The group didn't want to get caught with the meth, so they decided to kill her. 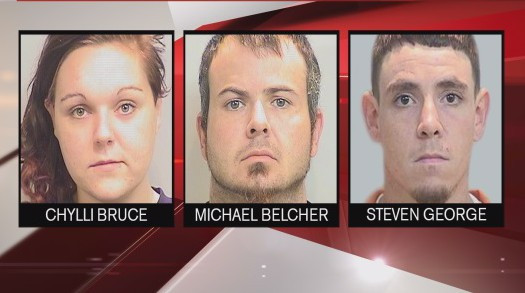 They took her to Belcher's house where they stripped, hogtied, and beat her. They ripped out her fingernails, toenails, and teeth. They stuffed her into the trunk of Belcher's car and drove her to the forest where they tied her to a tree and slashed her throat. When she was found, her skull was detached from her body and her organs had been removed.