Trang Phuong Ho, 20, grew up in Vietnam before fleeing with her father on a fishing boat when she was 10. She learned English in a refugee camp in Indonesia before she moved to the US. Ho was valedictorian at Boston Technical High School and was a premed student at Harvard.

Sinedu Tadesse, 20, grew up in a rich family in Ethiopia. Her father had a history of jail time which made her unpopular with her schoolmates and was consistently shunned. She was admitted to Addis Ababa, a prestigious school, and graduated valedictorian before heading to Harvard. 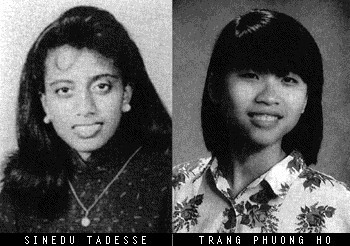 Ho and Tadesse were roommates. Ho was social, outgoing, and had a healthy job working to help support her family while she went to school. She would often go back to Medford, Massachusetts, to spend time with them on the weekends.

Tadesse kept to herself. She was socially awkward and didn't have many friends. She did not have a close relationship with her family and even went as far as to send letters to random people she found in a phone book asking for them to be friends. One law student received the troubling letter and reported to the university, who did not reach out to Tadesse and simply filed the letter away. 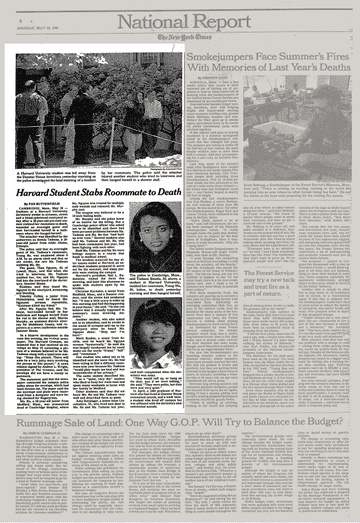 Tadesse's diary entries conveyed that she was jealous of Ho. In the last week of the semester, Tadesse sent a photo of herself to the school newspaper with a note that said, "Keep this picture. There will soon be a very juicy story involving this woman."

On Sunday, May 28th, Tadesse woke up to her alarm at 8 am and began stabbing Ho. Ho's friend, Thao Nguyen, was sleeping over at the time and tried to intervene but got stabbed herself. She fled to find help. Tadesse finished killing Ho and then hung herself in the bathroom.