It's no secret that everything was a bit creepier in the 1800s. One particular photo of 1800s memorabilia has been making its way around the internet under the guise of Siberian bear hunting. Is it actually?

According to a conservation forum from 1998, conservationist Barbara Applebaum wrote about her experience with the suit. Instead of bear-hunting, she believes it was more for bear-baiting. Naturally, bears wouldn't understand the implications of the spikes until they attacked the individual in the suit. For a hunter, that would still make it impossible to defend yourself, but if you're the baiter, the hunter could strike.

The suit is made out of leather while the helmet is made out of iron. One-inch nails are scattered all over the suit and are secured with another layer of leather. Needless to say, this suit isn't very breathable! 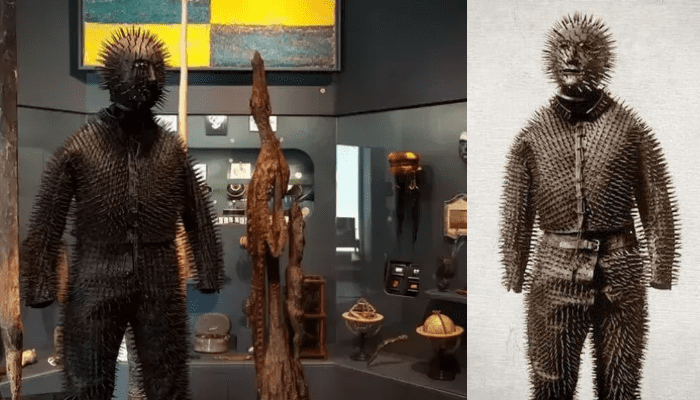 As of 2017, the suit was in the Menil Collection in Houston, Texas. The owners called it a "Wildman Suit" and is part of an exhibit called Witness to a Surrealist Vision. The entire exhibit has work from surrealist artists.

Since it's in a surrealist exhibit, many people believe that it's not real and is just an artist's rendition, but that's not the case! The suit itself is an original artifact and appears to be authentic, but has been taken in by the art exhibit as a part of the show.

One conclusion is that is really was a bear-hunting (or baiting) costume, and another is that it was for a folk festival back in the day.

Either way, this is not something you want to see running around in the woods.