Mary Ann Cotton worked as a dress maker and a nurse when she was very young. She married her first husband, William Mowbray, in 1854 when she was just 20-years-old.

The couple moved around a bit and had two more daughters and two more sons. Isabella was the only child to survive past the age of four.

William died in 1865 of an alleged intestinal disorder. Mary Ann collected insurance for his death and of one of their sons.

Mary Ann married George Ward soon after. George died a little over a year after their marriage, once again of alleged intestinal problems.

She married once again to James Robinson. They met when she became his housekeeper and he seeked out her comfort after his son died. She got pregnant and they got married very quickly.

Mary Ann’s mother died right around this time as well. The official record says hepatitis, but she complained of stomach pains for a week before her death.

All three had stomach issues before their death. 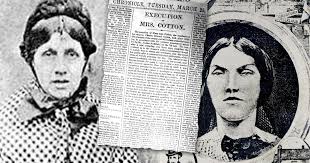 Mary Ann had given birth to two children with William. Their first died at four months old.

William, thankfully, noticed that her demands for life insurance policies on him and their kids was suspicious. They fought, and he kicked her out.

Despite being homeless, Mary Ann found another husband: Frederick Cotton. Frederick was the brother of Mary Ann’s friend, Margaret. Margaret ended up dying of suspicious stomach ailments, and Mary Ann was there to comfort her brother… Then, they got married.

Unsurprisingly, Frederick ended up dying of gastric illnesses soon after.

People finally caught on when she murdered Fredericks son, Charles Edward. She verbalized to her friends that he was in the way. Her biggest mistake was trying to get insurance money from him after he died…

Finally, someone performed an autopsy on the body. They found lethal levels of arsenic in his system. She was sent to trials for the murders of her husbands and children.

Only two of her kids managed to survive her murderous ploys. George, who stayed with his father, and Margaret Edith, who was born while Mary Ann was in prison.

Mary Ann went to the gallows, ending her 20-year reign of terror.