This hospital in London has centuries of mistreatment and torture. It was introduced as a hospital that also treated the insane in 1357. By 1377, the prime use of the hospital was to “treat” the mentally insane, no other patients walked through the door. For over six centuries, Bedlam tortured their ‘patients’ with unlivable conditions, horrific treatments, and mental abuse.

In 1600, a report came out that the sewer underneath the building was blocked. Filth and waste piled up at the entrances, which caused an entire mess of illnesses. In 1728, James Munro became the chief physician, changing how the asylum function completely… For the worse. To make it worse, his family would be in control for the next four generations. Under the Munro family, the victims of Bedlam would suffer horrible treatments that included starvation, beatings, bloodletting, and ice cold baths. The facility soon opened its doors to the public. Wealthy Londoners were able to pop in and check out the mentally insane victims who were strapped to their beds or completely catatonicÂ out of fear. 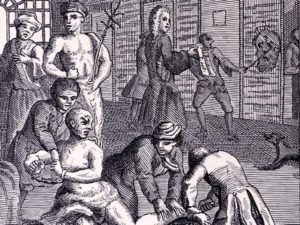 At just 10 shillings, the inmates were purposefully put on display. Rich women would walk around in their fancy gowns with their expensive handkerchiefs in front of their noses. In 1816, the final Munro superintendent, Thomas Munro, resigned after a scandal. The hospital tried to move forward with less horrific treatments of mental illness. Although straightjackets, lobotomies, and padded isolation cells weren’t all that great either. To this day, Bedlam still works as a mental asylum but has changed drastically in modern times.