What Was The Warminster Thing?

On Christmas morning in 1964 in Warminster, a young couple were woken up by their frantic dog who had escaped into the backyard. Their daughter, who was woken up by her parents talking, went outside to investigate. The dog was lying down and trembling. Just as she ran back inside to tell her parents, she heard a "whining, crackling, rasping, droning, shattering sound."

The same night, a flock of pigeons was found dead by an unknown cause. Hordes of field mice were found in the same way. Witnesses claimed that the sound was a "sonic attack." More and more people began to witness this bizarre, painful phenomenon and reported it to the police. 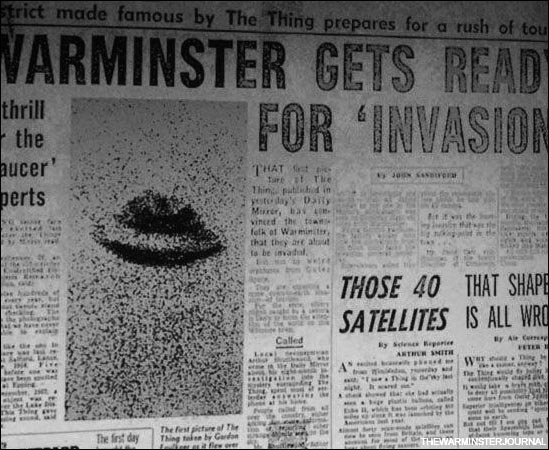 As rumors spread, it was found out that nearly 30 individuals also heard the sound on Christmas morning. Months later, the sounds were accompanied by the visual phenomenon as well. One person described the UFOs as "cigar-shaped and covered with winking bright lights." Another said it looked like 'twin red-hot pokers hanging downwards, one on top of the other, with a black space in between."

By August of 1965, people from around the country were visiting Warminster in hopes of experiencing something paranormal. The BBC filmed Pie in the Sky, a documentary about the events. Warminster journal editor Arthur Shuttlewood wrote several books on events. UFO enthusiast Ken Rogers began publishing The Warminster UFO newsletter, which complied with interviews of witnesses and other theories as to what might be happening. 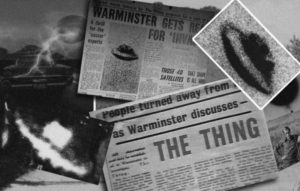 By the 1970s, the sightings and experiences had completely stopped. No one heard the soul-rattling sounds or saw the inexplicable UFOs. Skeptics would claim that this is just made up by attention-seekers or crazy UFO fanatics. That theory seems like a stretch since there were thousands of reports. People would flock to Warminster to see something, anything that resembled a UFO.

If anything, this event is unsolved and a mystery.