By Pete A 2 years ago

Suzan and Michael “Bear” Carson met after divorcing their respective spouses. This average relationship quickly turned into one that was obsessed with drugs and mysticism.

They classified themselves as “vegetarian Moslem warriors” and fully believed that witchcraft, homosexuality, and abortions were punishable by death.

Things escalated when the two murdered their 22-year-old roommate Keryn Barnes. Suzan believed that Barnes was a witch, and the couple ended up beating her with a frying pan and stabbing her 13 times. They ditched her body in the basement and fled the state.

Michael was working on a marijuana farm when he began to suspect that his co-worker was also a witch. He told Suzan, and they decided to murder Clark Stephens by shooting him to death and burning his body.

They fled again, and now police knew it was them. When searching the home that they fled, police found anti-government writings and wishes to kill President Ronald Regan and celebrity Jonny Carson because they were witches.

The couple was hitchhiking when they found another victim. 30-year-old Jon Charles Hellyer picked them up. Suzan quickly suspected that he was a witch as well. They demanded he pull over and a struggled ensued outside of the car. Michael shot and killed Hellyer in front of passing cars, who called the police. 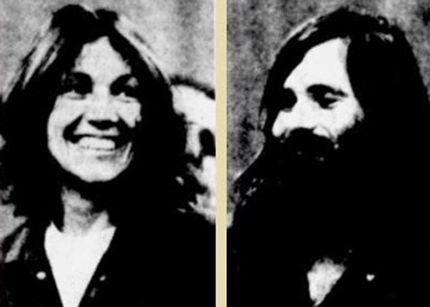 They ended up on a wild police chase before they were finally arrested. Their only explanation was that their victims were witches, and that Suzan was a mystic who knew the past, present, and future and figured it all out.

The two are serving life sentences with no parole. Many believe there are more victims out there.