For over a hundred years, a little girl named Carrie Foreman has been sighted running through traffic. Non-locals report it to the police, fearing that a small girl is just lost. Every time, police have investigated and reported that it was just Carrie. Carrie was a three-year-old girl who spent a lot of time at her grandfather’s store. She would sit on the porch and watch the horse and buggies go by, amused by all of the hustle and bustle of the busy road. 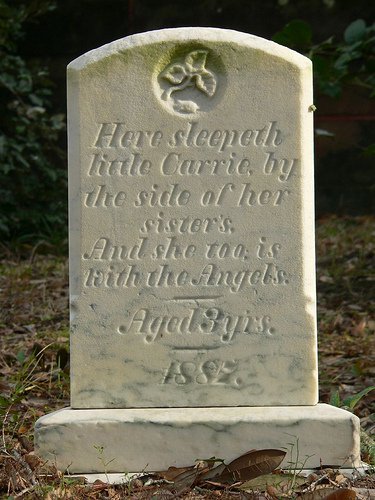 One day, she fell off the porch. She ended up succumbing to her injuries a few days later and was buried close by. Ever since that day, Carrie had been seen on the same stretch of road in her same yellow dress that she was buried in. Back in 1966, a horrible car wreck happened on that stretch of road. The drivers reported seeing a little girl run into the street, and they swerved to miss her, causing the accident. No little girl could be found. Then, in 1989, another car accident happened again in a similar manner. The drivers involved said a little girl ran into the street, and they swerved into each other. Once again, no little girl was found. To this day, drivers have reported seeing her playing in the street. She has been seen in multiple spots in the area, and she’s always wearing that same yellow dress.