Mysterious lights have been appearing over Brown Mountain in North Carolina for decades. Onlookers have no explanation for the bizarre lights. The weirdest part is that they appear over the same 310-mile marker on the Blue Ridge Parkway.

Most witnesses describe the light in the same way. It’s a glowing orb that takes on a reddish color. To the naked eye, it’s the size of a basketball. Allegedly, the lights have been spotted even as early as 1913. They were mentioned in the local paper,Â Charlotte Daily Observer.Â 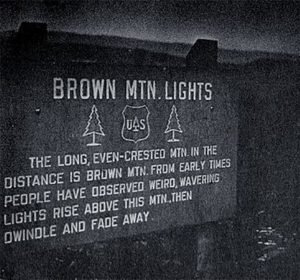 Some locals say that the lights have been spotted since before the EuropeanÂ settlers arrived. Even the Cherokee attributed the lights to spirits. The local story goes that they believed these were the spirits of women searching for their husbands lost in battle. There’s also another popular story that many people believe… In the 1850s, a woman named Belinda disappeared while exploring Brown Mountain. Locals assumed that her husband murdered her. Searchers were looking for any trace of her and saw the lights appear overhead. Those who witnessed it said it was obviously her spirit, returning to haunt her murderer and lead searchers to her body.

These lights have been observed by scientists and photographed by locals. Two studies were conducted by the U.S. Geological Survey. No one knows for sure what they are. The best time to see them is on the Blue Ridge Parkway between mile markerÂ 301 and 310. You can best see the lights early in the day on a dry, clear, and moonless night between September and November.