How The Oakland County Child Killer Terrorized a Small Community

Oakland County, Michigan was terrorized by unknown assailants between 1976 and 1977. Despite having possible guilty suspects, the task force assigned to these crimes still doesn't have a solid perpetrator despite tons of evidence and polygraph tests.

Mark Stebbins, 12, was the first victim of the Oakland County Child Killer. He and his mother were out at an American Legion Hall on February 15th, 1976 when he decided to go home. His body was found four days later, strangled and sexually assaulted. He had rope marks on his wrists and ankles and remained in the clothing he was last seen in. It was evident that he had been captive in the days between his disappearance and death.

On December 22nd, 1976,  Jill Robinson, 12, ran away from home after an argument with her mother. One day later, her bike was found behind a hobby store. Four days later, her body appeared on the side of an interstate. It was evident that she had been killed by a shotgun wound to the face. She was fully clothed and even had her backpack still slung over his shoulder.

When a third victim showed up with similar evidence, they were confident that these murders were the result of a pedophilic serial killer... or even a group of them. Kristine Mihelich, 10, went missing on January 2nd, 1977. She was last seen at a local 7-Eleven store. When she hadn't returned home after three hours, her mother reported her missing.

It took 19 days, but Kristine's body was found on the side of a rural road. An autopsy showed that she had been smothered less than 24 hours before her body was found.

The most important piece of evidence that tied these murders together was how they were disposed of. Each child had been laid out in the snow in perfect sight. Their hands were crossed over their chests and they were laying on their backs. This was no coincidence.

A task force was put together soon after Kirstine's body was found. More than 18,000 tips were received, many of which were possible witness accounts. They were able to compile a composite sketch of a possible suspect which resulted in two dozen arrests.

They never caught the killer, but they did end up busting a multi-state child pornography ring. Unfortunately, the task force disbanded in 1978 after no other luck.

Timothy King, 11, was the last confirmed victim of the Oakland County Killer. He went to a drugstore on March 16th, 1977 at about 8:30 pm. He disappeared after leaving through the back door. This was soon after the police confirmed a serial killer targeting children, so residents were extremely aware of what was going on.

In a TV plea for help, Timothy's father begged for his son's return. His mother printed a letter in the newspaper saying that she wanted her son to come home so she could give him his favorite meal; KFC.

Six days later, Timothy's body was found in .a shallow ditch on the side of a road. His skateboard was next to his body, and his clothing had been washed, dried, and pressed. Forensics confirmed that he had been suffocated and sexually assaulted... The last piece of evidence was extremely gruesome.

The postmortem report confirmed that Timothy had eaten fried chicken right before his death. 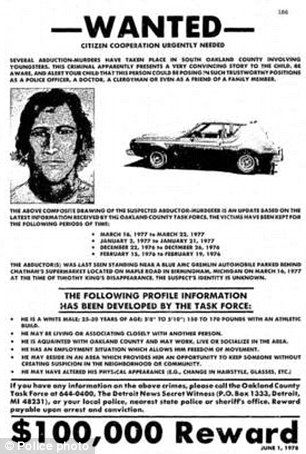 The suspect's list comes up pretty dry.  A man who called himself Allen wrote into the police and claimed that he was a sadomasochist slave to a man named Frank. Apparently, Frank was the OCCK. Allen said that he was upset, remorseful, and suicidal because of the killings. Allen told Dr. Bruce Danto, who was a psychiatrist working with the task force, to respond by printing the words "weather bureau says trees to bloom in three weeks."

After Danto did, Allen called him and said he would offer photographic evidence as long as he got immunity. Danto agreed to the terms and attempted to meet up with Allen, but he never showed up and was never heard from again.

Archibald Edward Sloan was a convicted pedophile who lived in the area. Hair samples were found in his car that matched the hair that was found on Timothy and Mark. Weirdly enough, it did not match the hair that was on Archibald's head. Turns out, he lent his car out to his pedophile friends. Smart.

Others thought that maybe John Wayne Gacy was a perpetrator. In 2013, DNA tests confirmed that he was not involved.

There were other suspects who had pretty criminal backgrounds and seemed to fit the profile, but investigations came up dry. They had no confirmed leads, and the family's have been left in the dark about who killed their children.