The True Story Behind ‘The Conjuring 2’

By Pete A 2 years ago

The Enfield Poltergeist is quite possibly one of the most well documented paranormal hauntings of all time. The evidence is so real and so scary that it even inspiredÂ The Conjuring 2. Peggy HodgsonÂ moved into a new home with her four children. Things were going smoothly until two of her children began to play with a Ouija board. Margaret, 13, and Janet, 11, were in their room when they were playing. All of the sudden, they said that the chest of drawers moved across the floor. Their beds began to shake, and knocks were coming from the walls around them. Naturally, they were freaked out. Things didn’t stop happening when Peggy came into the room. 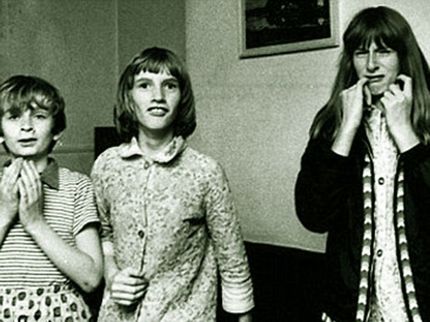 Not knowing what to do, she called the police to help. At the end of the night, Officer Carolyn Heeps signed an affidavit saying that she saw a chair rise into the air all by itself. Officer Heeps was the first of many to have paranormal experiences over the next two years. There were so many crazy things that reportedly went down within those walls. Coins, toys, lamps, furniture, and even the daughters were reported thrown across the room or moved around.

The Society for PsychicalÂ Research had two paranormal investigators come out to help the folks at the Poltergeist house. During the investigation, the investigators claimed to have heard an old man’s voice coming from Janet. The voice said, “Just before I died, I went blind, and then I had a hemorrhage and I fell asleep and I died in the chair in the corner downstairs.” They said the voice was gruff and angry. It unsettled everyone around. There are even recordings online of the voice for everyone to listen to. Two other researchers involved are convinced that it was fake and the girls were playing with them. Soon enough, people began to not believe them. They left the family int he home, where they later left. It’s unclear if they were faking it or if it was real. Either way, it’s still pretty horrifying.