The Warwickshire “Witchcraft” Murder of 1945

Charles Walton was a quiet farmer that lived a frugal life with his adopted daughter, but he was struck down by the very thing that held his family together.

Charles Walton (74) lived in a small cottage on a farm with his adopted daughter, Edie Walton (33). Charles had been working on farms his entire life, and he made a name for himself raising prized horses. At the ripe age of 74, Charles kept active but needed to walk with two canes due to his arthritis.

Charles Walton operated on a very consistent schedule. He would leave his house at 8:30 in the morning and return at 4:00 sharp. He ate a slice of cake every single day for lunch. Except for one Valentine’s Day morning, Charles left at 8:30 with his cake, and never returned.

Charles’ adopted Daughter, Edie, thought that this was strange. She went down to the town that was about a mile south of them, she contacted one of her father’s friends and charged back up the hill with him in search of Charles.

Edie found Charles’ body on the path that he takes to walk home from the farm. A hayfork had been stabbed through his face, one prong on either side of his head as if he was struck from above. His own knife was jammed into his throat in a way that kept him alive for the duration of his death. His canes were removed from his arms and had been used to shatter his collar bone and break the entire left side of his ribcage. His suspenders and trousers were unfastened, his belt was left neatly laid across his body.

When authorities reached the scene, the surrounding 20 feet looked like a slaughterhouse. Charles had been alive for the entirety of his torturing, so his heart was pumping blood out of his body consistently. An autopsy revealed that he had suffered several blows to the head, most likely by his own walking stick, which incapacitated him. Charles’ death was ruled as shock and loss of blood. 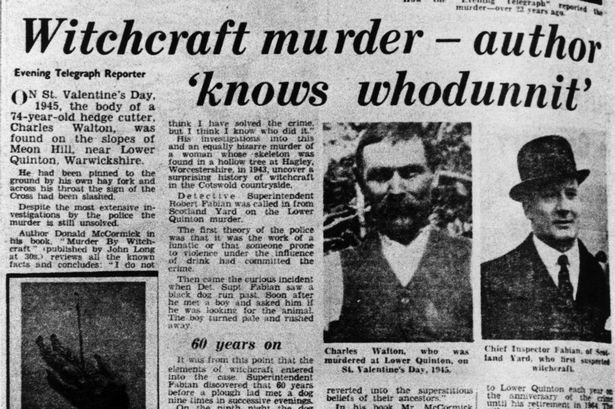 The strangest part of his murder was the fact that his pocket watch was missing, and that there was a cross carved into his chest that was so small that the coroners almost missed it. Locals believe that this murder was connected to an undiscovered “witchcraft” cult that was rumored to live within the crops during the growing season. None of that is confirmed, but three days after Charles’ body was removed from the site it was found at, a large black dog was found splayed open, hanging from the tree Charles was killed under.