October is just around the corner (basically?) so we’re getting into the spooky spirit through fun urban legends.

A photo from 1962 surfaced with a scary story behind it. In the photo, there are a group of people posing in creepy-looking masks. The photo itself is pretty unsettling, but the story that was behind it was shocking. 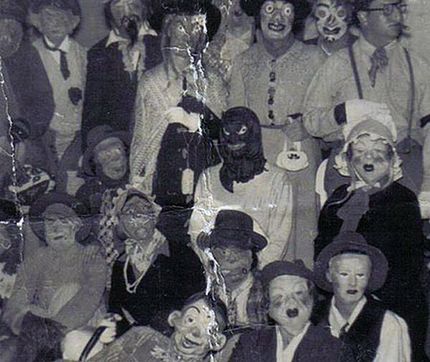 According to the myth, a masked person in the photo was responsible for the murder of seven of the party guests.

The man in the black mask (the creepiest one, honestly) locked all of the doors to the home and attempted to murder everyone at the party.

Thus began the story of the Halloween Massacre.

Now, in reality, it never happened, but it surely makes a good campfire story.

This is simply just a creepy, vintage Halloween photo. Back in the day, Halloween was actually scary, and people figured out some really creepy costumes.

Before Halloween was truly commercialized, people had to get really creative. They would usually use unusual household objects to make their own Halloween garb.

Honestly, it’s not surprising that a lot of people actually believed this legend. These days, it’s pretty easy to believe that something so awful would happen.