A strange multi-forum spanning post in 2012 lead some of the world’s most talented hackers on a wild and confusing adventure. 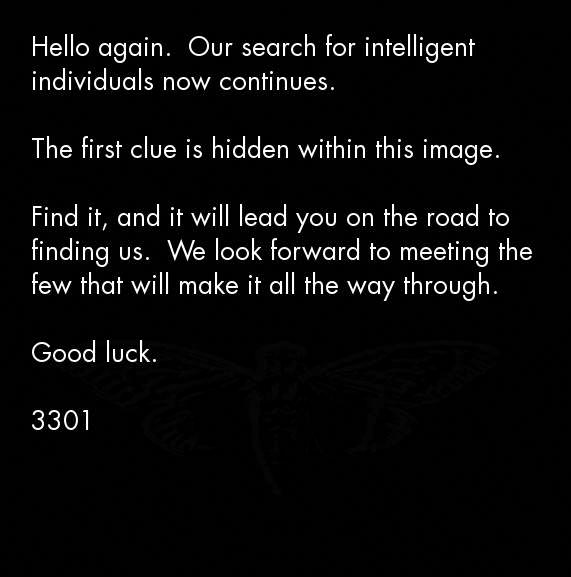 On January 4th, 2012 multiple posts circulated on multiple forums in the form of .jpg files. The message read that an organization, named Cicada 3301, were looking for “highly intelligent” individuals and that there was code hidden within the image that would take them to the next clue.

It was easy to write this off as someone unnecessarily stirring up attention, however, several Redditors banded together and found that if you open the image in a text editor, a readable line of text followed by a cipher was distinguishable. After deciphering the link, it brought the user to another photo, that when opened in steganography software they found that there was another link embedded within the second image.

That link lead to a subreddit, that lead to a book, which gave the user a code that was a phone number located in Texas. When dialed, a prerecorded message said “Very good, you have done well” and gave directions to the second step of the puzzle.

The second stage was a real life coordinate hunt to find QR codes that were hidden around the world. Once this had been done, it is speculated that Cicada filtered the individuals who completed the test, and a month later they stated that the test had concluded.

There are testimonies from individuals who have completed the challenge, but none of them were within the timeframe that Cicada had laid out for its participants. In other words, none of these individuals had been “chosen” afterward, and nobody who completed the puzzle and was “chosen” has stepped forward.